Stadler tram-trains for Lugano from 2020

SWITZERLAND’s Lugano Railways (FLP) has awarded Stadler a SFr 47m ($US 47.3m) contract to supply nine low-floor tram-trains as part of a major expansion of its Lugano - Ponte Tresa line services to cope with a 70% increase in ridership over the past 10 years to 2.5 million passengers a year. 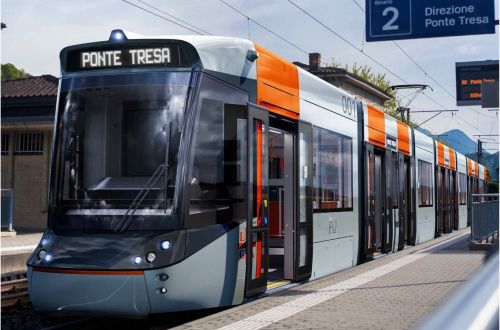 The seven-section tram-trains, which can also be operated in pairs, will almost double capacity from 320 to 600 passengers per train, with delivery due to begin in 2020.

The 45m-long vehicles will initially be used on the meter-gauge S60 line between Lugano and Ponte Tresa, replacing the existing fleet which dates from 1978. This will bring a much-needed upgrade in rolling stock, with air-conditioning and CCTV systems internally and externally as well as multi-functional spaces with room for strollers, prams and bicycles.

The 12.3km line was upgraded between 2004 and 2007 to provide a frequency of 15 minutes and there are plans to further upgrade it between 2020 and 2027, with a new direct 4km-long link between Lugano and Mollinazzo, including a tunnel under Lugano’s main station and an extension from Mollinazzo to Manno. Other improvements will follow in a second phase.