TRANSPORTNAYA Koncessionnaya Kompanya (TKK), a consortium of Lider Group and LSR Group, in St Petersburg, Russia, has placed an order with Stadler for 23 Metelitsa trams. The first six vehicles are due to handed over in July 2017. 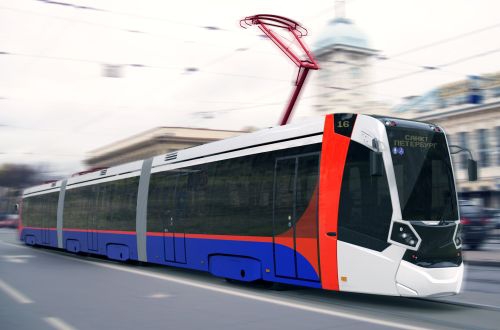 The 33.45m-long three-section low-floor trams are bidirectional and have five sets of double doors on each side. The vehicles can accommodate 370 passengers of whom 66 can be seated. Two areas are set aside for pushchairs, wheelchairs and bicycles. Stadler says articulated joints in the bogies are designed to minimise noise and maximise passenger comfort.

TKK was awarded a 30-year build-operate-transfer concession earlier this year to develop a fast tram network serving the Krasnogvardeyskiy district in eastern St Petersburg. TKK is investing around Roubles 33.7bn ($US 520m) during the concession, which includes upgrading 14km of tramway used by lines 7, 8, 10, 30 and 64 to fast tram standards. The city of St Petersburg is also contributing Roubles 1.3bn. The Stadler vehicles are expected to start entering service in August 2017.

This is Stadler’s first order for Metelitsa, which has been designed for operation on broad-gauge tram networks. A prototype vehicle was unveiled at the world ice-hockey championships in Minsk, Belarus, in 2014. The prototype then went on a tour of Russian cities.

Stadler says the contract is particularly important for its factory in Minsk which has been suffering from a lack of orders due to the fall in the value of the Russian rouble. While this contract has eased the situation, Stadler is considering whether to transfer production of some vehicles from its central European factories to Minsk.