KRAKOW Transport Authority (MPK) began three months of trial operation with a Solaris Tramino low-floor LRV on February 23 to evaluate the performance of a vehicle equipped with a supercapacitor energy storage system on the city's standard-gauge tram network. 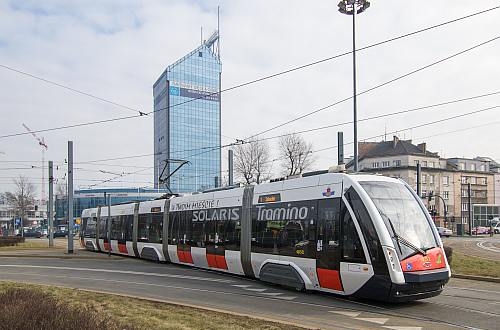 The 32m-long five-section vehicle is being used in passenger service on Line 1, which links Salwator in the city centre with Wzgóra Krzeslawickie in the eastern district of Nowa Huta.

The onboard supercapacitors store energy recovered from the regenerative braking system, which according to Solaris reduces energy consumption by 20-30% compared with other LRVs on the market.

Krakow's 85km tram network has 25 routes with 358 stops and carries around 190 million passengers per year. MPK is planning further investment in its tram fleet with the acquisition of 36 32m-long vehicles.

Last year MPK placed an order with Pesa for 36 43.8m-long Krakowiak low-floor LRVs, which will be used to increase capacity on the busiest parts of the network.