THE municipality of Uppsala says the Swedish government has agreed to provide SKr 900m ($US 101m) to co-finance the construction of the city’s first light rail line. 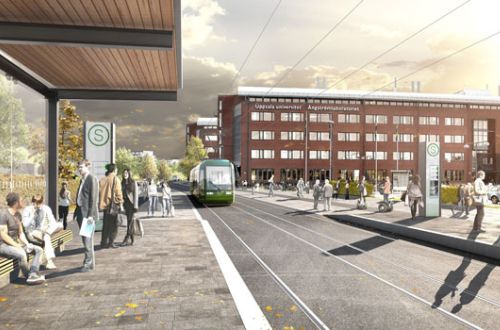 The project is part of a broader plan to build 70,000 new homes in Uppsala county, which also includes quadrupling the northern section of the Stockholm - Uppsala line and the construction of new main line stations at Nysala, south of Uppsala, and Bergsbrunna near Knivsta.

Around 50,000 of the new homes will be built in the south of Uppsala municipality, including 33,000 in Bergsbrunna. The line, dubbed Ultunalänken, will connect Bergsbrunna station with Uppsala city centre via Fyrisån, Ultuna and Gottsunda.

A study carried out by WSP of options for improving public transport in the south of the city concluded that only a tram line would be capable of providing the capacity required on the corridor by 2030.

The municipality says government financing is only available for the light rail option, which would also benefit from SKr 1.5bn in land value capture, compared with just SKr 80m for the BRT solution.

This means the net cost comes to SK 5.1bn for the light rail option and SKr 5.2bn for BRT, with trams also expected to generate higher fare revenues.

Under the agreement with the Swedish government, Ultunalänken will need to be completed in time for the opening of Bergsbrunna station in 2029. Construction is therefore expected to start in 2024.