SWITZERLAND's Federal Office of Transport (BAV) has approved construction of the initial 4.6km phase of the light rail network Lausanne. 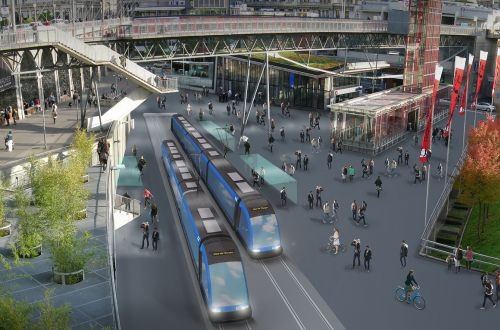 The 10-station Line T1 will run west from an interchange with metro lines M1 and M2 at Flon in the city centre, following Rue de Genéve and Avenue des Morges to Préslaz-les-Roses in the district of Malley and continuing to Perrelet, where the line's depot will be located, before terminating outside the Swiss Federal Railways station at Renens.

The project also includes a bus rapid transit line from Préslaz-les-Roses to Saint-François and the development of a new cycle corridor along the route of the tram line.

Services will operate at 5-8-minute intervals with a journey time of 15 minutes between the terminus stations.

The aim of the project is to support densification of the west of the city and the line will support a major new residential development on former industrial land in Renens.

Studies into the project were launched by the canton of Vaud, Lausanne Transport (TL) and the municipalities along the route in June 2012. Construction is expected to take four years to complete and an extension from Renens to Villars-Sainte-Croix is proposed in the longer-term.