WITH the release of the final version of its NSW Long Term Transport Master Plan the New South Wales state government has announced that a new light rail line will be built through the centre of Sydney to serve the districts of Randwick and Kingsford. 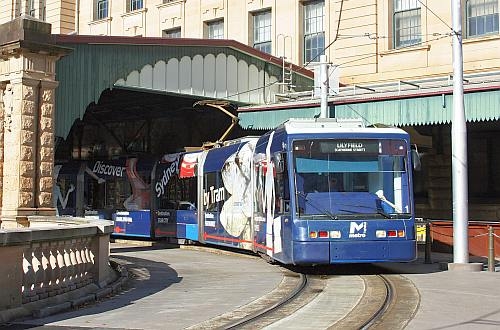 The estimated $A 1.6bn ($US 1.7bn), 12km line will link Circular Quay and Central Station via George Street, the Moore Park sporting and entertainment centre including the Sydney Cricket Ground and Allianz Stadium, Randwick Racecourse, and the University of New South Wales.

The line will be constructed in parallel with a redesign of the bus network, which will reduce the number of buses entering the city centre during the morning peak by more than 220 per hour.

Construction is expected to begin in 2014 and the government says that while the final project timetable is still being drawn up, early analysis suggests it will take five or six years to complete. The line will be funded from the transport budget, third party contributions and a PPP contract, although the timing of the project will be subject to PPP negotiations.

Expansion of Sydney's only existing line is underway with the 5.6km Inner West Light Rail Extension project from Lilyfield to Dulwich Hill, due to be completed in 2014.