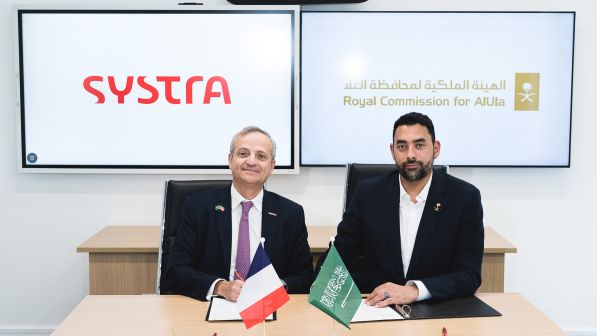 THE Royal Commission for AlUla (RCU) in Saudi Arabia has appointed Systra to act as lead design consultant for a new light rail system connecting the historic city of AlUla with the Unesco World Heritage site of Hegra.

Phase 1 will run for 21km from the former Hedjaz Railway station in AlUla north to Hegra, serving 15 intermediate stations.

Systra will carry out preliminary and detailed design studies for all civil works, landscape and architecture, including track and the rolling stock depot. It will also be responsible for rolling stock design and systems integration.

The contract was signed in London on July 1. Systra is due to start work this year for completion within 10 months.

“The fact that the Royal Commission decided to build a tram line is very significant,” Systra CEO, Mr Pierre Verzat, told IRJ. “It is proof that they want to reduce their carbon footprint, that they want to develop sustainable solutions.”

Verzat says that one of the major challenges of the project will be to properly integrate the new infrastructure with its surroundings, “where there is a huge historical legacy to respect,” as well as scarce desert water supplies to protect.

“It is in an oasis where there is only sometimes one metre of solid ground and below that you have water, and if you make one single error and allow fresh and salt water to mix you just kill all the trees,” Verzat says.

“But it is not outside of our normal set of skills, as we have already worked on a light rail line in an oasis at Ouargla in Algeria. We have the experience, it is matter of allocating senior engineers to the project.”

The tram route is to be operated with a fleet of battery-powered vehicles, with a maximum speed of 50km/h, and will resemble the rolling stock of the Hedjaz Railway which ran from Damascus in Syria to Medina in Saudi Arabia.

Rolling stock and station design will both set out to create an immersive experience for visitors, reflecting AlUla’s recent history as an important stopping point for pilgrims and its ambition to become a global destination for tourism “and the world’s largest living museum,” says RCU.

The second phase of the project would run southwards for an additional 33km to the international airport, further strengthening AlUla’s development as an important regional transport centre.

“Created to be an experience as much as a means of getting around, passengers will enjoy incredible views of the surrounding landscape, growing urban developments, cultural sites and world-famous heritage areas in complete ease and comfort.”

For detailed data on rail projects in the Middle East and around the world, subscribe to IRJ Pro.