Disruption and technical failures during the first week of operation. 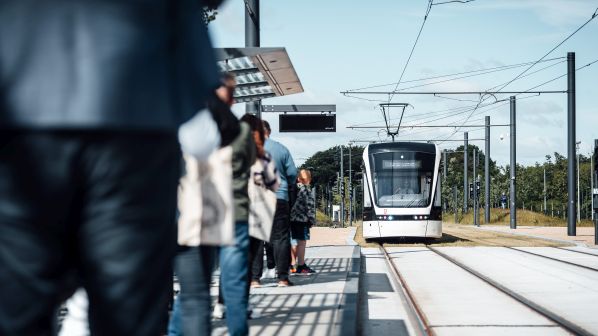 THE Odense light rail network has received “overwhelming interest” since opening on May 28, but has also suffered from disruption and technical failures during its first week of operation.

The 14.5km light rail line runs from Tarup Centre via the city centre to Hjallese. Comsa handed over the infrastructure to Odense Letbane, the public agency implementing the project, on April 26. Stadler was selected for a contract to supply 14 Variobahn low-floor LRVs for the line, with this later increased to 16. The line has 26 stations and will offer an end-to-end journey time of 42 minutes.

“We are extremely pleased with the reception the light rail has received,” says Odense Letbane CEO, Mr Dan Ravn. “We have seen full trains throughout the week on a scale that we had not dared to hope for. And I am sure we have had many passengers who are not normally daily users of public transport. Hopefully someone has had an experience that will inspire more light rail travel from now on.”

However, the line’s first week in operation has been marked by several operational problems.

On June 4, the network suffered a power failure, and in the afternoon an LRV suffered a technical failure and had to be towed away. There have also been issues with the sensor system which is supposed to give LRVs right of way at traffic lights, causing further delays. High passenger numbers have also extended boarding and alighting times at stations.

“I very much regret the inconvenience experienced by many passengers, particularly on Thursday and Friday,” Ravn says. “The combination of delayed trains and lack of passenger information is highly unfortunate, and I fully understand the great frustration expressed by a number of passengers.

“We are increasing staffing in our control centre so that we have an extra set of free hands to focus on passenger information at stations and in relation to light rail drivers. At the same time, our system supplier is working to identify and resolve the technical outages we have experienced.

“It goes without saying that starting up the operation of a light rail system with thousands of passengers daily is a large and complex task. There will always be ‘teething problems’ and it will take time before we reach an optimal flow in our operations.

“But I can assure you that we are always fully focused on gathering experience and improving the passenger experience, and I am confident that week by week we will get closer.”

Construction began in April 2018, with the line originally due to open at the end of 2020 before being delayed several times due to construction and approval delays. Keolis was awarded a 15-year operation and maintenance contract worth €230m in December 2018. The final section of track for the project was laid on April 28 2021, with test operation along the full line beginning on December 16 2021.