The line is due to open at the end of November. 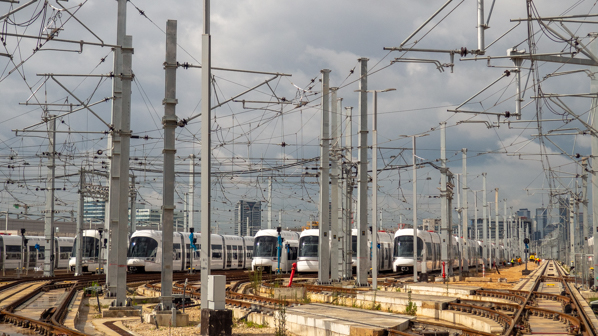 THE opening of Tel Aviv’s first light rail line could be delayed by months as issues with the 25km at-grade and underground Red Line’s signalling system and stations mount, IRJ has learned.

The Red Line runs north from Bat Yam/Holon and then travels through central Tel Aviv before continuing east to Petach Tikva and Givat Shmuel. The line is the first of three planned by the Tel Aviv Metropolitan Mass Transit System (NTA).

Covid-19 related issues caused the original October 2021 opening date to be delayed, but IRJ was informed during a visit to Tel Aviv on March 15 that the project was expected to meet the updated delivery schedule of November.

However, The Times of Israel reports that during a trial run in the middle of August carrying Ministry of Transport director general, Ms Michal Frank, and senior ministry staff along with NTA chairperson, Ms Maya Liquornik, an LRV suddenly braked while travelling at 80km/h underground due to a signalling fault. This fault is reportedly happening frequently on the line.

Other issues concern staffing. According to IRJ sources, only half of the drivers and staff needed have been recruited and with unemployment in Israel at a historic low of 3.8%, it could be difficult to attract new employees. In addition, construction is running behind schedule with only five underground stations expected to open in November, with most stations still unfinished and experiencing electrical, safety and finish issues.

Experts have also raised concerns over the potential for heavy winter rains to cause flooding on the line.

A NTA spokesman told IRJ that the line is still officially due to open on November 30, and the NTA is currently running full-page advertisements in local newspapers to instruct pedestrians and drivers on how to stay safe around the new LRVs.

Contracts for Tel Aviv’s Purple and Green lines were awarded in February, with preliminary work now underway. Alstom, bus operator Dan Transportation and Israeli infrastructure company Electra were awarded a contract to design, build, maintain and finance the 39km Green Line, while a consortium of CAF and construction firm Shapir was awarded a €1.015bn contract to construct and equip the 27km Purple Line, both of which are expected to be fully operational by 2027. Both lines will connect with the Red Line.

A feature on the Tel Aviv Red Line appeared in the May edition of IRJ.