The line was due to open in October 2021, but completion was delayed by Covid-19. 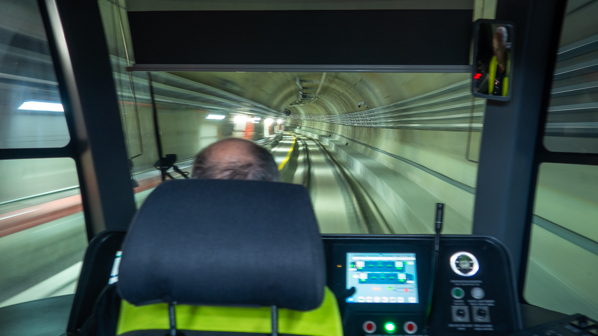 TEL Aviv Metropolitan Mass Transit System (NTA) is on track to open the city’s first light rail line, the 25km at-grade and underground Red Line, in November of this year after Covid-19 related issues caused the delay of the original October 2021 opening date.

During a visit to Tel Aviv on March 15, IRJ was told that the project was now expected to meet the updated delivery schedule, with three months of trial running due to begin in July.

The project was on-time in February 2019, but a year later the pandemic forced a four-month closure of CRRC’s factories in China where manufacturing of the 90 five-car LRVs for the line was taking place. Many sub-suppliers were also affected, further adding to delays. There were also issues transporting the vehicles, which were shipped as two and three section units, which also increased costs.

The project also endured pandemic-related construction delays. However, the testing is now underway, with around half of the 90 LRVs for the line, which will operate in multiple, having passed the two-week certification and testing process.

The 10km dual-bore tunnels run from a branch to the line’s depot at Kiryat Arye and from Geha Interchange, west of Shenkar station in the northwest to Manshiyya/Neve Tzedek east of Ben Zvi station. From here the line continues at-grade for 10km, serving 13 stations before reaching the terminus at Bat Yam. An additional 5km at-grade section with six stations runs east from Shenkar to Petrach Tikva Central Bus Station.

Driver training has been underway since November, initially using a simulator supplied by Australian-based Oktal Sydac under contract from CRRC, and now on the line.

The line is equipped with CBTC, allowing LRVs to operate at Grade of Automation 2 (GoA2) in the underground sections, with the driver responsible for closing the doors and supervising the system. Drivers control the LRVs on at-grade sections with the assistance of the train protection system. The train control system can also be monitored from the Operational Control Centre at the depot, which is able to remotely stop the train in the event that the driver is incapacitated.

Due to the security situation in Israel, the train is equipped with a number of security features. These include impact-proof glass and an additional cover to protect the traction equipment located in the roof of the vehicle in the event of a Molotov cocktail attack, with the increasing the weight of each vehicle to 50 tonnes. Digital systems such as CCTV and Wi-Fi are also designed with improved cyber security, while the OCC is located underground and surrounded by strengthened concrete to allow it to continue operating in the event of an attack.

CRRC is responsible for the maintenance of the LRVs for 16 years but is also training Israeli staff to ensure knowledge transfer. Two maintenance facilities have been built at the depot beside Kiryat Arye station, including a light maintenance facility to allow minor regular maintenance, and a heavy maintenance workshop which includes two train jacks, a bogie cleaning facility and bogie jack.

The depot has 23 tracks totalling 1.7km, three times the size of the depot for the Jerusalem light rail network.

Contracts for Tel Aviv’s Purple and Green lines were awarded in February, with preliminary work now underway across the city which is experiencing chronic congestion and high car dependency.

Alstom, bus operator Dan Transportation and Israeli infrastructure company Electra were awarded a contract to design, construct, maintain and finance the 39km Green Line, while a consortium of CAF and construction firm Shapir have been awarded a €1.015bn contract to construct and equip the 27km Purple Line, both of which are expected to be fully operational by 2027. Both lines will connect with the Red Line.

Egis, France, was awarded a contract to lead the development of a €40bn underground metro system in Tal Aviv, which will have three lines totalling 150km, serving 109 stations.

For detailed data on rail projects in Israel and across the world, subscribe to IRJ Pro.