Test running of first Santos LRVs to start in June

EMTU, which is managing a project to build a 16.9km light rail line linking São Vicente with Santos, Brazil, says that testing of the first LRV will start in June. 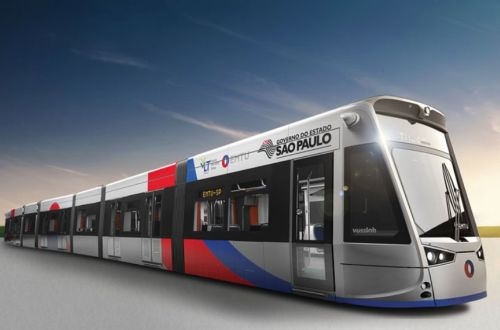 "By the end of June, when we'll make our first trip, a major part of the LRT infrastructure should be completed," said EMTU's CEO Mr Joaquim Lopes during a visit to the works on February 4.

Tremvia Santos, a consortium of TTrans and Vossloh, is supplying a fleet of 22 seven-section 43.7m-long stainless-steel LRVs. The first three vehicles are due to arrive from Spain in May, while the remainder of the fleet is being assembled in Brazil.

The first section under construction is 11km long and runs from São Vicente and Councillor Nébias in Santos to the port. The second stage will be 5.8km long and connect Councillor Nébias with Valongo Terminal in the old centre of Santos. The light rail network will be fully integrated with buses to serve about 70 million passengers/day.