IRELAND’s minister of transport, tourism and sport Mr Shane Ross witnessed the start of dynamic testing on Dublin’s Cross City Line on June 17, when the first gauging tests were carried out on the extension of the Green Line from St Stephen's Green to Broombridge. 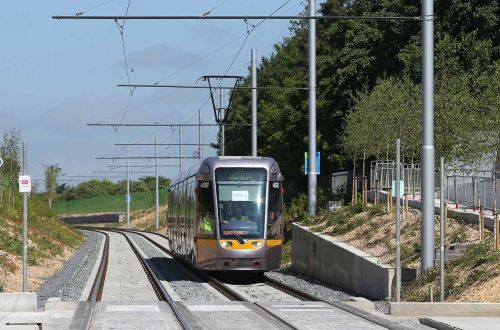 Two Alstom Citadis LRVs ran at walking speed over both the northbound and southbound lines on the 5.9km extension, stopping at each of the 13 stations to check platform clearances.

Commercial services will begin on the €368m extension in December, increasing annual ridership on the Luas network by around 10 million passengers per year.

Alstom is supplying seven 54.9m-long Citadis LRVs for the extension, which will be 11.6m longer than the vehicles currently in service on the Green Line. Platforms on the existing section of the Green Line from St Stephen's Green to Sandyford are being lengthened to accommodate the longer vehicles.