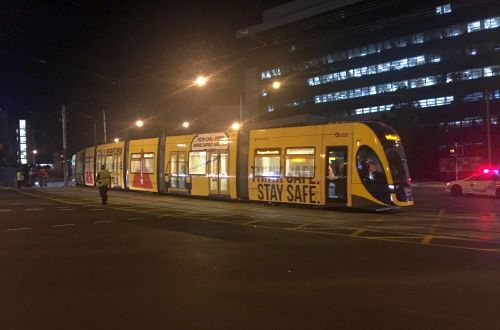 Stage 2 is due to open in time for the 2018 Commonwealth Games, which will be held on the Gold Coast in April 2018.

GoldlinQ CEO Mr Phil Mumford said the testing of trams was not only a crucial time for the project team and specialist engineers involved in construction, but also for the community. “During this time, Stage 2 communication systems are also tested in isolation before being connected into the existing operations centre,” Mumford explains. “Each connection occurs outside of operating hours to ensure the transition occurs smoothly, but these are complex systems and we are doing everything we can to ensure that there is no impact on Stage 1 operations.”

The council’s immediate priority is Stage 3 from Broadbeach to Burleigh and later to the airport at Coolangatta. The Queensland state government has previously committed $A 5m ($US 4m) for planning of Stage 3A as far as Burleigh Heads and the council says it hopes construction will begin by 2020.