TEST running began on Ottawa’s light rail Confederation Line on December 2 when an LRV operated between Cyreville and Blair on the eastern section of the route. 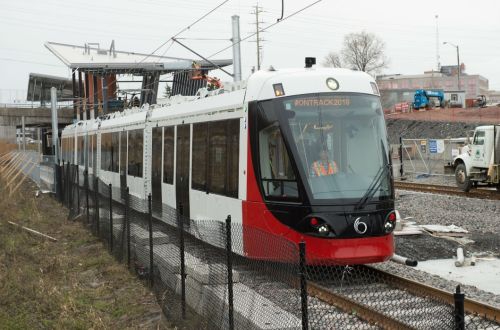 The 12.5km east-west line from Blair to Tunney’s Pasture will serve 13 stations and includes a 2.5km tunnel on the city centre section. Commercial operations are due to begin in 2018.

The line is being built by the Rideau Transit Group under a $C 2.1bn ($US 1.6bn) design-build-finance-maintain contract awarded by the City of Ottawa in February 2013.

Rideau Transport Group is led by ACS Infrastructure Canada, and includes Dragados, SNC-Lavalin, Ellsidon, Veolia and Alstom, which is supplying rolling stock for the project.

Alstom will assemble 33 of the 34 Citadis Spirit LRVs at the line’s Belfast Yard and will also be responsible for maintaining the fleet.