DESPITE heavy snowfall, the first test runs on the cross-border tram line between Strasbourg and Kehl, Germany, took place on January 10, when a 42m-long Alstom Citadis LRV belonging to Strasbourg Transport Company (CTS) operated over the section between Aristide Briande station and the new Citadelle Bridge, which will carry trams across the River Rhine. 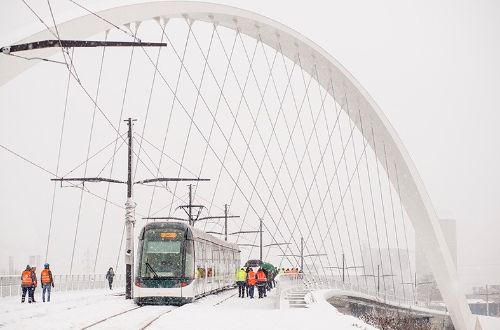 The 3.9km extension will take Line D through the port of Strasbourg and across the river to serve Kehl mainline station, before terminating outside the town hall.

The initial test runs were carried out at walking speed and focussed on platform clearances and the operation of the 750V dc overhead electrification system.

Testing on the German section of the line is due to start on February 3 and testing will take place along the entire length of the extension between February 22 and March 17.

The extension is due to be inaugurated by French president Mr François Hollande and German chancellor Mrs Angela Merkel, although no date has yet been set for the opening ceremony.