CONSTRUCTION of the initial phase of the Ion light rail network in the Canadian city of Waterloo reached a milestone on November 7, when LRV testing began on a section of line close to the depot on Dutton Drive. 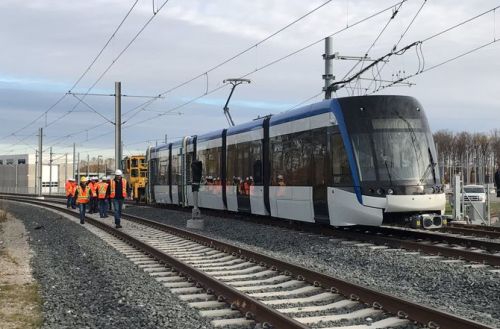 The initial unpowered tests will focus on wayside and station platform clearances as well as pantograph-catenary wire contact.

Stage 1 of the Ion project involves constructing a 19km 16-station light rail line from Conestoga Mall in Waterloo city to Fairview Park Mall in neighbouring Kitchener, together with a 17km Bus Rapid Transit line from Fairview Park to Ainslee Street in Cambridge.

The light rail line is being constructed by the GrandLinq consortium under a 33-year design, build, finance, operate, and maintain contract awarded in 2014.

Bombardier is supplying 14 Flexity Freedom LRVs worth $C 92.4m ($US 70.9m) with an option for 14 additional vehicles.