THREE consortia have been shortlisted for a public-private partnership (PPP) scheme to design, build and partially finance the City of Edmonton’s Valley Line West Light Rail Transit (LRT) project, following a request for submissions which closed on February 24. 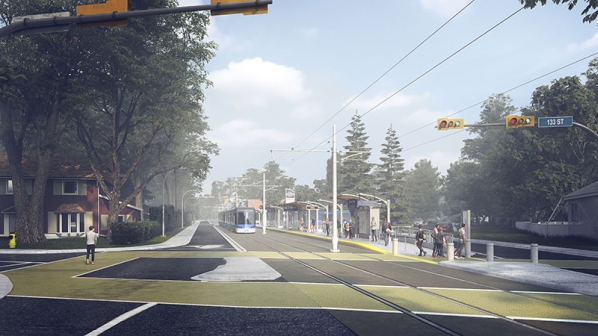 The project is the second phase of the 27km Valley Line light rail line, running 14km from Mill Woods through the city centre to the west end, with 14 stations.

The three consortia are:

The city will now engage in a request for proposals, which will culminate in the selection of the preferred bidder in mid-October. Work is set to begin in 2021.

The project was due to be a procured through conventional methods, but is being retendered as a PPP after SNC-Lavalin and a team led by Vinci subsidiaries Eurovia and Carmack withdrew, leaving only VLWJV in the competition.

The Canadian federal government and the province of Alberta agreed in March 2019 to contribute $C 2bn ($US 1.4bn) towards the expansion of the Edmonton light rail network. The Canadian government is contributing $C 948m through the Canada Infrastructure Plan and Alberta providing $C 1.04bn through the Climate Leadership Plan for the Valley Line West.

The City of Edmonton is also advancing the LRV procurement, as well as preparing for operation along the full Valley Line. The city is considering an order for up to 40 low-floor LRVs, around 40m-long, with a nominal value of $C 300m. The city is looking at the benefits of signing an agreement with Bombardier, which supplied the LRVs for the Valley Line Southeast, and depending on this may come to market with an order in autumn 2020.

An assessment of the operation and maintenance strategy for the Valley Line Southeast will also take place before a final decision is made regarding the full Valley Line.

The city is considering whether to expand this partnership to cover the operation and maintenance of the full line. However, no decision is anticipated until the end of 2022.

In the meantime, the city intends to hire an independent operations and maintenance advisor to complement its own advisory team.