TRANSPORT for Greater Manchester (TfGM) says it is on course to complete a second light rail line through Manchester city centre before Christmas after the final rails were laid on September 13. 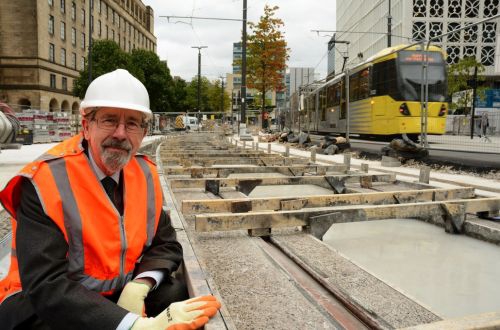 The £165m Second City Crossing, which will open next year, will enable more frequent, reliable and flexible services on the busy tram network, which carries more than 35 passengers a year.

The first phase of the route from Victoria station to a new stop at Exchange Square was opened by TfGM in December 2015, thanks to a grant from the European Regional Development Fund which fast-tracked the process.

The remaining civil engineering works are due to be completed by the end of the year, meaning the city will be free of Metrolink construction work in time for the festive periods when a Christmas market attracts millions of visitors to the city.

The Second City Crossing is expected to open in early 2017 despite worries that construction delays would cause TfGM to postpone the opening until the summer. The line is part of the Grow project, which will have invested more than £1bn in Manchester city centre infrastructure improvements by 2017.