THE mayor of Florence Mr Dario Nardella visited the district of Novoli on April 30 to view progress on the construction of the city's second light rail line and mark the laying of the first 100m of track. 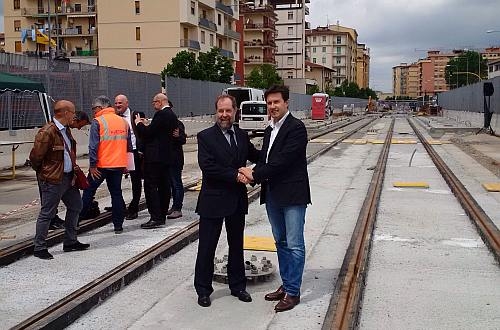 Starting at San Marco Square in the city centre, Line 2 will run to the city's main station, Santa Maria Novella, where it will interchange with Line 1 and the future Line 3, before continuing west to serve Florence Belfiore high-speed station and Peretola Airport.

The line is part of a broader project to construct three new lines by 2017, partly utilising former heavy rail alignments.

AnsaldoBreda will supply 29 five-section bidirectional Siro low-floor LRVs for lines 2 and 3 under a €60m contract signed in June 2005.