BASELLAND Transport (BLT), the Swiss tram operator serving the greater Basel area, has launched trials with a collision warning system with a view to equipping its entire fleet of Tango trams with the technology. 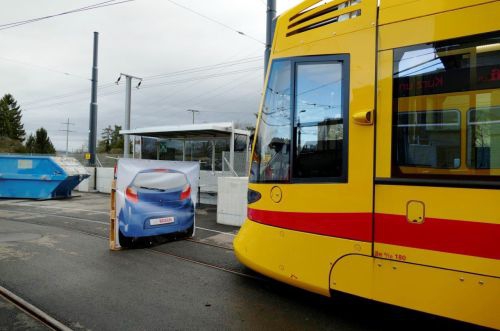 The project is being carried out with Stadler Rail, which built the Tango trams, and Bosch Rail Transport, which developed the Tram Forward Collision Warning System. The aim is to help tram drivers recognise and react to potentially-critical situations in the face of increasingly-dense traffic.

The technology comes from the car industry, where it is already well-proven. In a first step, the system will only be used to give a warning of impending danger to drivers. In a second step, the brakes will be applied automatically in the event of an emergency, although the driver will be able to intervene at any time.

The system comprises a video camera and a radar sensor. The sensor covers a range of 160m in front of the tram and measures the distance and speed of cars, buses and other trams travelling in this area. It also detects stationary objects as well as moving obstacles.

The video camera complements the radar sensor, surveying the track and enabling the system to differentiate between people and objects.

All the information from both sources is fed to a central control unit to give a picture of the immediate environment, together with other information such as the speed of the tram.

In the case of impending danger, it provides a visual and acoustic warning, giving the driver time to react. If the driver reacts too slowly, an automatic brake application occurs.