OPERATORS of German and Austrian tram-train networks using the so-called Karlsruhe model announced on November 8 that they will pool their resources to jointly order rolling stock for their respective systems. 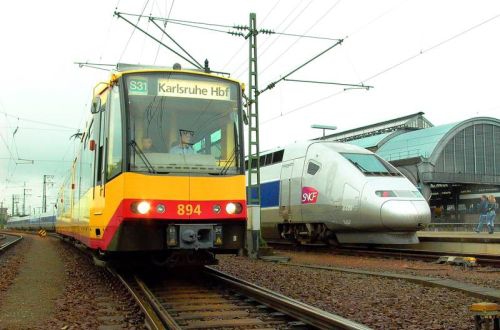 AVG says the formation of the VDV TramTrain project group will ensure the future viability of the Karlsruhe model and could even open it up to new operators.

The group will be led by Mr Thorsten Erlenkötter of AVG with the support of the Association of German Transport Companies (VDV). Work will begin on the development of a specification for the new vehicles within the next few weeks.

The project partners hope to issue a joint tender in autumn 2018, which would enable the delivery of the first vehicle by autumn 2021. The tram-trains would then go through the approval process for operation on light rail and heavy rail infrastructure, with up to four pre-series vehicles undergoing trials in participating cities. The delivery of series vehicles is expected to begin in 2024.

If there is no fundamental change in the operators’ contracts, up to 300 vehicles could be ordered. AVG and VBK will be the largest customers, with a combined requirement for around 180 vehicles for the network around Karlsruhe.

The project partners have been working towards the launch of the project since 2009, and anticipate that joint procurement could deliver savings amounting to more than €100m.

AVG says several other cities which may adopt the Karlsruhe model in future have expressed an interest in participating in VDV TramTrain.

Erlenkötter envisages a modular vehicle capable of accommodating variation in platform heights and axleloads. “You can look at it like buying a car,” he says. “We are ordering a model that will be available in two or four-door versions with different colours and special accessories.”
The vehicle will be developed with a standardised carbody, traction system, and safety concept, enabling all vehicles to operate using a single safety case.

Standardisation is also expected to generate further benefits after delivery. “You can get spare parts together, consult jointly with experts, create a vehicle reserve and strengthen your negotiating position with manufacturers,” Erlenkötter says.

AVG says the VDV has already approached suppliers, which have given “an extremely positive response” to the concept.