Tunnelling was completed 53 days ahead of schedule. 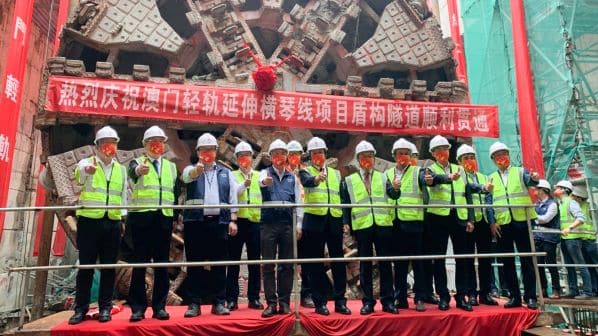 Tunnelling with the TBM was completed 53 days ahead of schedule.
Photo Credit: Directorate of Public Works Services

CONSTRUCTION of a 900m underwater tunnel has been completed as part of the 2.2km Hengqin Island Light Metro Line extension in Macau, which is due to open in September 2024.

The line, which will run between the existing Lotus Checkpoint station on the Tapia Line in Macau and a station on the island of Hengqin, has been commissioned by the government of the Macao Special Administrative Region and is being built by Nam Kwong União Commercial and Industrial.

Work to dig the 7.7m-diameter tunnel using a tunnel boring machine (TBM) began on July 25 on Hengqin Island and was completed on November 25, 53 days ahead of schedule.

The line is the first underwater rail tunnel in Macau, and the experience gained will inform other projects including the East Line light rail line.

Construction of the elevated stations in Macau, the underground station in Hangqin and the cut and cover tunnel section are 78% complete, while general civil construction works are about 60% complete. Operating systems such as signalling are ready to be installed once civil works have been completed.