CONSTRUCTION of part of the 8km Uithof light rail line linking Utrecht Central station with the university area at De Uithof has been delayed and line is now expected to be completed in December 2019 instead of this year, while the cost of the project is forecast to increase. 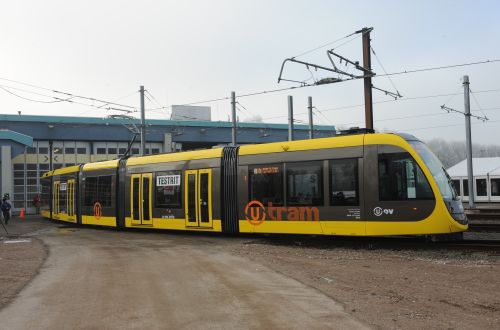 One of the first CAF Urbos LRVs for Utrecht.
Photo Credit: Quintus Vosman

The delay concerns the section between Utrecht Vaartsche Rijn station and Utrecht Central station, which is currently being redeveloped. The area around Central station is critical for the light rail project as LRVs need to be able to cross the reconstruction area to reach the depot at Nieuwegein on Utrecht’s existing light rail line. It has been discovered that the new line needs stronger foundations in the station area, which will delay the project.

The extra work and the delay will increase the cost of the project by €84m. The city of Utrecht will cover €25m leaving the Province of Utrecht, which is also the regional public transport authority, to fund the remaining €59m.

As the eastern part of the line has been completed to a major extent, the first of the 27 five-section CAF Urbos 100 LRVs for the Uithof Line have already made test runs on the section between Vaartsche Rijn and De Uithof Park and Ride station.