THE first of seven CityLink LRVs for Sheffield's tram-train pilot project has left Vossloh Rail Vehicles' plant at Albuixech near Valencia in Spain on the first leg of its journey to Britain. 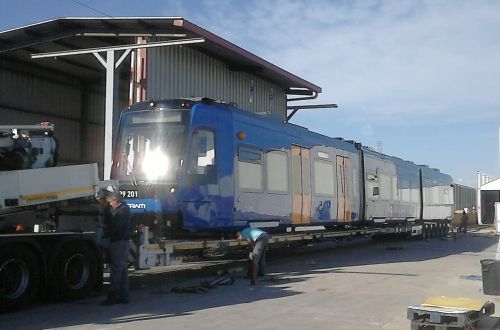 The 37m-long dual voltage (25kV ac 50 Hz/750V dc) vehicle, which is designated class 399, will be shipped from the port of Santander to Southampton, where it is due to dock on November 28, before reaching Sheffield on December 1.

The £58m pilot project is being led by South Yorkshire Passenger Transport Executive (SYPTE) with the backing of Network Rail, the Department for Transport. Northern Rail, and the city's light rail operator Stagecoach Supertram and involves linking the light rail network network with Network Rail's existing Meadowhall - Rotherham freight line via a 160m connection at Meadowhall north of Sheffield. This will enable the through operation of tram-trains between Sheffield city centre, Rotherham Central, and the Parkgate retail park in Rotherham, with a 20-minute interval service throughout the day.

Network Rail will install 11.5 single track-km of 750V dc electrification and one 600kW substation, together with additional signalling and a 200m turnback facility at Rotherham Parkgate.

The project was approved in 2013 and originally due to be completed this year, but design issues relating to the link between the light rail and heavy rail networks have delayed the launch until 2017. However, in the meantime the Vossloh vehicles will be used to provide additional capacity on the Supertram network, where they are expected to enter service in May 2016.

Only three of the vehicles will be required to operate Parkgate services, with three being used on the Supertram network and one vehicle remaining at the depot as a mainteance spare.

The pilot will run for two years with the aim of establishing permanent tram-train operation between Sheffield and Rotherham in the longer-term. The objective of the pilot is to understand the cost impacts of operating lightweight vehicles on the national network; determine technical standards for tram-trains; gauge passenger reaction; and determine practical and operational issues of operating between tram and mainline networks.