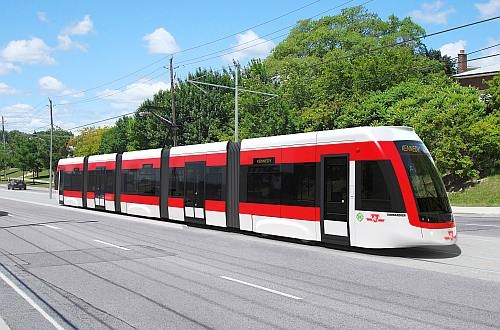 The first of the Flexity Freedom LRV are due to be delivered in mid-2016, and will be used on the 19km, 16-station line from Conestoga Mall in Waterloo to Fairview Park Mall in Kitchener. The $C 92.4m ($US 89.2m) contract will include an option for 16 additional vehicles.

Toronto Transit Commission (TTC) has 204 Flexity Freedom LRVs on order, mostly for its existing light rail network, while Metrolinx expects 182 similar vehicles to be used for LRT expansion the Toronto metropolitan area. The Waterloo region's order is effectively an add-on to the previous orders made by TTC and Metrolinx.

The Waterloo region, encompassing Kitchener, Cambridge, Waterloo, and four smaller towns, lies around 100km west of Canada's largest city, and has a population of around 500,000.

The light rail line is part of a 36km initial network of light rail and bus routes that will connect the three cities. Buses will be replaced by light rail from Fairview Park Mall to Ainslie Street Terminal in Cambridge as part of the project's second stage, planning for which will begin next year.

The cost of the light rail/bus project is $C 818m, with the Province of Ontario and the Canadian government agreeing in 2010 to provide $C 300m and $C 265m respectively towards the capital cost of construction. The regional government agreed to meet $C 253m of the initial phase's capital costs in September 2011.