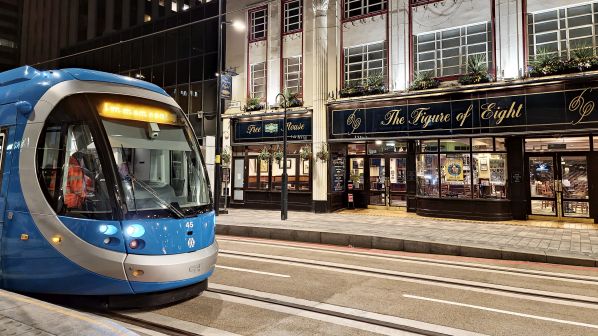 PASSENGER services are now running on the 1.3km extension of the West Midlands Metro light rail system from the Library stop in the centre of Birmingham to Edgbaston Village in the inner western suburbs.

The opening of the new route along Broad Street and Hagley Road, with intermediate stops at Brindleyplace and Five Ways, marks the completion of Phase 2 of the Birmingham Westside extension project.

Services operate every 12 to 15 minutes on the extension, serving many hotels, hospitality businesses and entertainment venues in the Broad Street area.

The extension opened on July 17, in time for the Commonwealth Games which are taking place in Birmingham from July 28 to August 8.

The Westside extension, including Phase 1 between Grand Central and Library which opened in 2019, has cost £149m.

July 17 also saw West Midlands Metro operations resume between Bull Street in central Birmingham and Library, having been suspended as repairs were undertaken to the fleet of 21 CAF Urbos 3 LRVs.

Services had been restored between Wolverhampton St George’s and Bull Street on June 5, the entire West Midlands Metro network having been closed since March 20 after cracks were discovered around the doors of LRV fleet.

This was the third instance of cracking in nine months, although previous cracks were found in the area above the bogies.

“We would like to thank customers for their patience as they awaited the return of trams to Grand Central and Library following the restoration of services between Wolverhampton and Bull Street a few weeks ago,” says Ms Sophie Allison, interim managing director of operator Midland Metro.

“This was made possible with the return to service of a number of trams following successful body panel replacement work. As this programme of work accelerates, even more trams will be rejoining the fleet, enabling us to increase service frequency across the network.”

“After an unfortunately interrupted customer experience this year for Metro passengers, I’m so pleased for local residents and businesses that we’ve now reached a turning point and a comprehensive service is returning,” says Mr Andy Street, mayor of the West Midlands and WMCA chair.

“This news could not have come at a better time as our hotels and venues prepare to offer a warm welcome to the thousands of people coming to town for the Commonwealth Games this summer. And the vast improvement in tram connectivity in the city centre will make it easier than ever to choose public transport, helping us to reduce congestion and tackle the climate emergency.”