The 6.7km line will have eight new stations and is scheduled for completion in 2025. 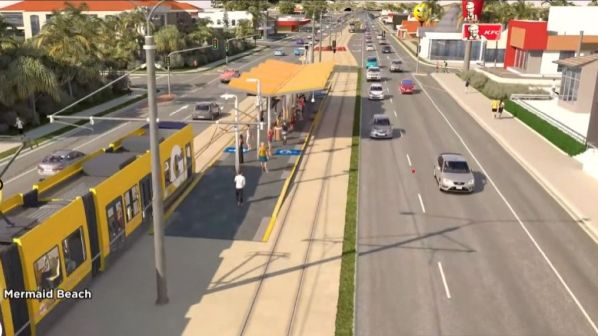 A scene from an animation showing how the Mermaid Beach station of Gold Coast Light Rail will look when operational.
Photo Credit: Queensland Government/Wikipedia

WORK has begun on the $A 1.2bn ($US 779.2m) Stage 3 extension of the Gold Coast Light Rail, which will add 6.7km to the line by connecting Broadbeach to Burleigh Heads.

John Holland was awarded a contract in April to carry out the works. The extension will include eight new stations and the project is scheduled for completion in 2025.

The initial work involves relocating and upgrading major water mains, sewer and gas infrastructure along the Gold Coast Highway, down the centre of which the extension will run, with two road lanes on either side of the light rail line.

“Gold Coast Light Rail is an essential part of our successful delivery of the 2018 Commonwealth Games and will play an even more important role in the 2032 Olympic and Paralympic Games,” says Queensland premier, Ms Annastacia Palaszczuk.

Stage 3 is jointly funded by the Australian and Queensland governments and City of Gold Coast. The budget for Stage 3 has increased from $A 709m to more than $A 1.1bn, with the state government blaming rising construction costs for the blowout.

“This is a great example of cooperation between the three levels of government and will help to support the extraordinary population growth being experienced by Australia’s sixth largest city,” says Australian executive government federal minister for emergency management, Mr Murray Watt.

Patronage on the Gold Coast Light Rail has recently risen significantly, and it has become the only public transport mode in Queensland to have surpassed pre-Covid-19 pandemic levels.

“Across all modes of public transport, we have continued to see steady growth as life returns to normal with patronage across southeast Queensland last week sitting at 78.4% when compared with 2019,” says Queensland transport and main roads minister, Mr Mark Bailey. “But light rail continues to set the benchmark and has hit 100% of pre-Covid levels for a full week - the first time any mode has done this since the pandemic.”