CONSTRUCTION has started of a second Metrolink light rail line in central Manchester to enable more LRVs to run through the city centre. 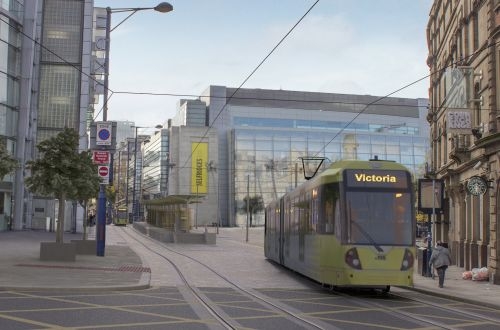 The 1.6km line will run from Victoria mainline station via a new stop in Exchange Square to St Peter's Square to bypass Piccadilly Gardens, the busiest junction on the 92.5km network which is traversed by nearly all LRVs.

Transport for Greater Manchester (TfGM) says the award earlier this year of a £10.8m European Regional Development Fund grant has enabled work to start on the £165m project earlier than planned. TfGM hopes to be able to open the short section from Victoria to Exchange Square during the winter of 2015-16, which will allow services to be increased on the Oldham line, and to complete the scheme in 2017. Services on the new Airport line will then be able to access the city centre.

A third platform track is also being provided at Deansgate-Castlefield station on the west side of the city centre to increase capacity there.