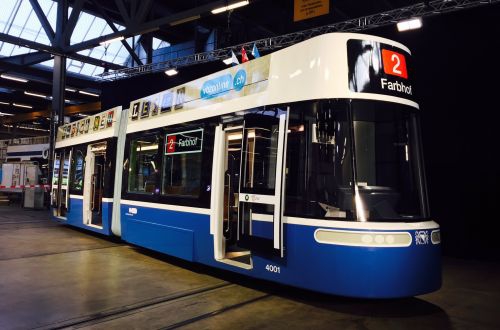 Deliveries will begin in late-2019 with the fleet entering service in mid-2020, enabling VBZ to begin withdrawing its oldest Tram 2000 vehicles, which date from the 1970s. VBZ is due to receive the final Flexity in 2021.

The wooden mock-up was built at VBZ’s central workshop in Alstetten and will be used to evaluate different exterior and interior design features and layouts.

The exterior and interior design was developed by the manufacturer and VBZ in collaboration with Thalwil-based Milani Design & Consulting. VBZ says a simple “restrained” design with high-quality natural materials has been adopted for an inviting interior. The mock-up will be used to determine the final colour and material variants for the interior.

LED lighting around the exterior of the doors will indicate when doors are opening or closing.

The new vehicles will also be equipped with a driver advisory system, which will alert the driver to potential hazards. The system will be trialled on a VBZ Cobra LRV from next month.