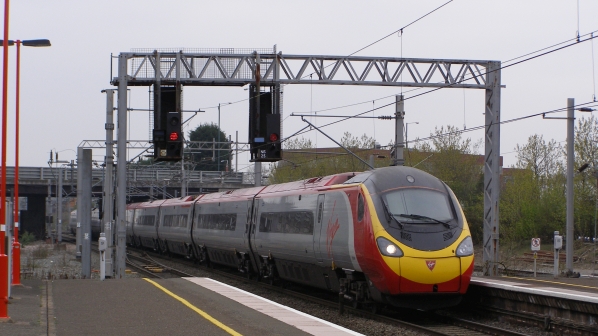 The project would be integrated with the High Speed 2 (HS2) project to improve connectivity to 60 towns and cities in the area. HS2 is a 338km London - Birmingham - Manchester/Leeds high-speed line, but the project is currently under review.

As Birmingham International Airport plans to increase passenger numbers to 18 million by 2033, the plan would ensure better access to the airport on the conventional network, utilising extra network capacity released by HS2, as well as track-doubling sections of the Coventry - Leamington Spa route south of the airport.

When combined with timetable changes, this would improve connections to Coventry and Birmingham Airport from the south of England, East Midlands, Yorkshire and the North East, while also increasing the frequency of services from Leamington Spa, Banbury, Oxford and Reading from one to two trains per hour and opening up new direct paths to and from Derby, Sheffield, Doncaster, York, Darlington, Durham and Newcastle. It will also increase capacity on the Birmingham to Solihull rail corridor.

The East Midlands Hub (EMH) will connect both HS2 and conventional services via a station at Toton between Derby and Nottingham. The HS2 East Midlands Hub Connectivity study, part-funded by Midlands Connect in partnership with East Midlands Councils, is examining what modes and methods of transport will best link users to the station.

Midlands Connect says research to date suggests that running four trains per hour from Toton to Leicester, Nottingham and Derby could drive significant economic benefits. The next stage of work will show how to best optimise connectivity along other rail corridors servicing towns across the East Midlands, including Loughborough, Matlock, Mansfield, Newark, Alfreton and Grantham.

These conventional compatible services would require electrification of the Midland Main Line north of Market Harborough and west of Nottingham, which would enhance connectivity between Leicester and Leeds and benefit existing services by improving line speed and reducing carbon emissions.

The route is currently served by an hourly service with a journey time of 1h 19min, but Midlands Connect says this frequency could be doubled, creating greater convenience and more capacity, potentially increasing passenger demand on the line by 72% to 350,000 users a year by 2037.

Initial investigations suggest that changes to calling patterns on this additional service, coupled with improved trains, could also reduce journey times by 20 minutes.

Incumbent operator Abellio East Midlands Railway has proposed an extension to services on this corridor from Derby to Nottingham and beyond, with these plans to be included in the Midlands Connect study.

Midlands Connect is examining the case for the frequency of services along the corridor to be increased from three to four per hour, made possible by capacity released by HS2, which could introduce a direct, hourly service from Shrewsbury, Telford and Wellington to London, as well as doubling services to Birmingham International from Shrewsbury, Telford and Wellington. The scheme would ideally involve electrification between Wolverhampton and Shrewsbury.

The study will also examine the economic case for speeding up Shrewsbury - Birmingham services from 56 minutes to 45 minutes, a reduction that can be achieved via track upgrades and possible electrification.

Midlands Connect says it may be possible to double the frequency of services following the opening of HS2, which would also improve access between Lincolnshire and the West Midlands. The project is examining how signalling upgrades and improved safety measures at the line’s numerous level crossings could reduce journey times from 55 to 45 minutes.

Improving services along the route is particularly challenging due to a flat crossing with the busy East Coast Main Line at Newark, as well as the line’s proximity to the River Trent, A1 and A46, which Midlands Connect says it is working to solve.

“In the Midlands, more people are travelling on the railways than ever before. We now need investment from government to allow our people, businesses and infrastructure to reach their full potential, and to drive a further boost in passenger numbers,” says Midlands Engine and Midlands Connect chair, Sir John Peace. “Once delivered, Midlands Engine Rail will vastly enhance connectivity across the region and beyond, an essential step in creating a more sustainable, productive and mobile Midlands.

“Whether they live in Shrewsbury, Lincoln, Birmingham or Leicester, our communities deserve the opportunity to make greener choices, to access a world-class education and to reach the widest possible variety of career opportunities. The time for discussion and inertia is over, we urgently need to move these plans forward and with the support of Government, to turn this vision into reality.”