32 disused lines in Baden-Württemberg could reopen

THE southwestern German state of Baden-Württemberg has published an analysis of 42 railway lines in the state that have been evaluated for re-opening with at least hourly services. 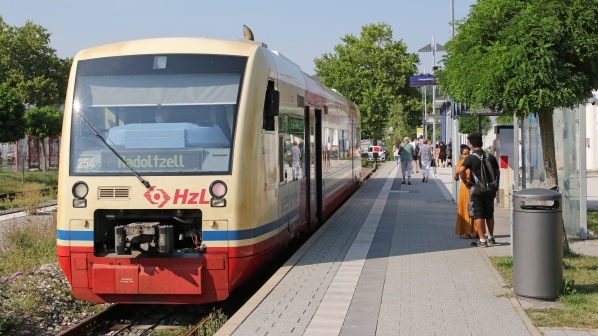 A Hohenzollern Railways (HzL) DMU at Stockach in August 2020; the disused line beyond the train is listed for reopening to Mengen.
Photo Credit: Keith Fender

The list follows the state’s announcement in October that it would provide enhanced funding for rail reopening and light rail schemes in order to become Germany’s “number one railway state.”

Presenting the report, transport minister, Mr Winfried Hermann, said there was a need to “start a new reactivation offensive together and ensure that many cities and municipalities are re-connected to the railways,” adding that local authorities should “get started with planning quickly.”

To encourage this, Hermann announced the state would fund 75% of planning costs between now and the end of 2023. Some of the lines on the lists are currently disused, others are open and some only operate seasonal or infrequent passenger services.

Of the 42, 12 are likely to generate at least 1500 passengers per school day and are therefore seen as priorities:

Another 10 are forecast to attract between 750 and 1500 passengers per school day and are also worth re-opening, including one international route to Switzerland (see map). The remaining 10 routes were assessed as potentially worth opening for weekend or seasonal traffic, including six that already have seasonal weekend trains. These routes are unlikely to attract more than 500 passengers a day if open year-round.

Under the new capital cost funding arrangements, local towns or counties will only have to fund 4% of the costs of reopening the lines. The Baden-Württemberg state government has agreed to also fund the running costs for new lines, assuming a standard hourly frequency is planned and 750+ daily passengers use the line.

If higher frequencies are required, the local government will need to fund the additional running costs. For lines with 500-750 passengers daily the state will fund 60% of the cost of an hourly service.