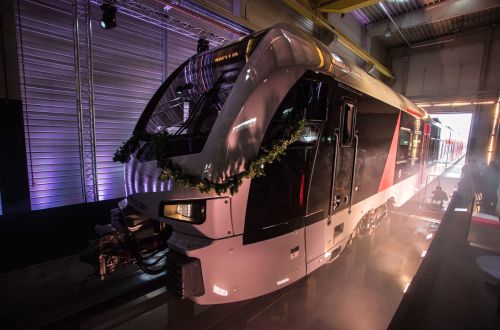 Abellio NRW operates an hourly train service under a joint contract with Rhine - Ruhr Transport Authority (VRR) and the Dutch Province of Gelderland. VRR Line RE 19 services are branded Rhine - IJssel Express, after two rivers in the area.

However, the launch of the service was not without incident and the first departure from Düsseldorf was cancelled as the train was not operational due to a recent software update. The inauguration train did run, carrying representatives of Abellio, NS, VRR, Gelderland province and other guests. The following day Abellio NRW managed to operate services according to the timetable.

VRR tickets are valid on the Dutch section of the route. Access and exit at Arnhem Central station is regulated by the Dutch OV - Chipkaart national public transport smart card system. To activate the barrier passengers must have a chip card or bar code on their ticket, which is read by a scanner to open the gates. If not, Abellio NRW staff can supply a key card to its passengers, which can be used up to eight times within a three-month period.

The new service is a considerable improvement for the Dutch - German border area. Apart from a short period in 2005 when Dutch regional bus and train operator Syntus (a Keolis subsidiary) tried a direct service between Arnhem and Emmerich during weekends, no cross-border regional service was available. The only way to cross the border was the two-hourly Amsterdam - Frankfurt ICE, which only calls at Arnhem and Oberhausen. The ICE service was introduced in 2000 and did not require a stop in Emmerich as the train is multi-voltage and switches between electrification systems on-the-move.