FOLLOWING a public tender, the Dutch province of Limburg has granted Netherlands Railways subsidiary Abellio a 15-year concession covering all regional bus and rail services in the province. 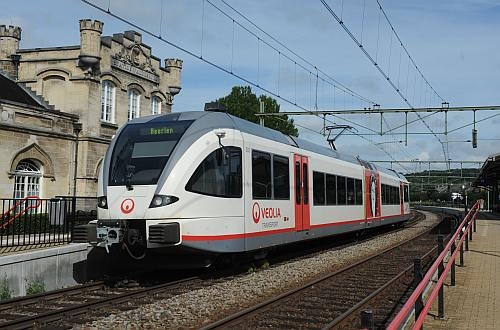 The contract begins in December 2016 and has an annual value of €55.5m or €1.5bn over the period of the concession.

The contract covers the following routes:

Both of the latter stopping train services, will operate alongside intercity services run by NS under the core network concession granted by the Ministry of Infrastructure. This is the first time that regional services commissioned by a regional authority will run in parallel with core network services.

Other bidders included the incumbent operator Veolia Transport Nederland, which reportedly submitted an invalid bid, and Arriva Nederland. The tendering procedure was criticised by non-NS bidders, which argued that Abellio, as an NS subsidiary, might have an unfair advantage due to the parent company's financial situation, its services, and rolling stock fleet.

Veolia took the case to court but the judge ruled in favour of the provincial government, although the Dutch Consumer and Market Authority (ACM) is now investigating the tender.

The winner of the tender is obliged to take over the fleet of five GTW EMUs used on the Heuvelland Line. These sets are leased from Luxemburg-based leasing company Macquarie and were delivered in 2008.

The new concession will need more electric rolling stock for the stopping train services and because the Nijmegen - Venlo - Roermond and Heerlen - Herzogenrath (Germany) lines are being electrified. At least eight multi-system EMUs, authorised for use in Germany, will be required for cross-border services, and the trains will also need to be equipped for operation into Belgium for possible future use between Maastricht and Liège.

It is likely that Abellio will opt for new Stadler Flirt 3 EMUs, which would be ordered through one of the NS leasing companies.

There is no obligation for the new operator to take over the GTW DMUs used by Veolia, although as NS does not have any other DMUs built after 2000 it is likely Abellio will continue to use these trains, which were delivered from 2007 onwards.