SPANISH infrastructure manager Adif completed the tunnelling for the new line between Sants station in central Barcelona and Barcelona-El Prat Airport on December 19. 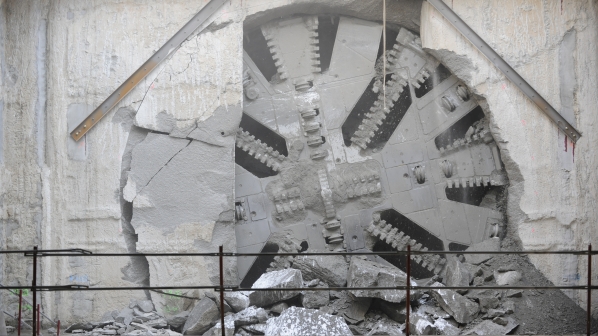 The 2230 tonne tunnel boring machine (TBM), which began in September 2017, broke through during a ceremony after completing 3km of the 3.4km-long tunnel for the line.

The 4.5km double-track line will branch off the Barcelona - Tarragona line before running to terminal 1, with an intermediate stop at terminal 2 where it will connect with Metro Line 9, which opened in 2016, and suburban Line R2.

Between 7 and 9 million passengers are expected to use the line each year.

Adif is currently preparing to tender the works for the second phase, which includes the superstructure, facilities, station architecture and the connection with the Barcelona - Tarragona broad-gauge line, worth an estimated €95m.

The minister of public works, Mr José Luis Ábalos, says the line will be commissioned in 2021.