Regional cross-border service between the Netherlands and Germany. 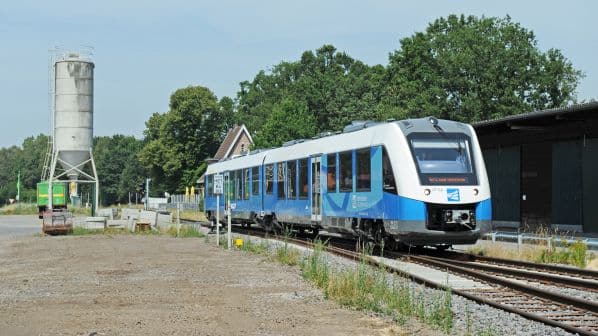 After reintroducing passenger services in 2019, Bentheimer Railway wants to extend operations into the Netherlands as far as the border station of Coevorden.
Photo Credit: Quintus Vosman

AN agreement has been signed to introduce a regional cross-border passenger service between Coevorden in the Netherlands and Bad Bentheim in Germany.

The cooperation agreement was signed on September 26 by the secretary of state of the Dutch Ministry of Infrastructure, Mrs Vivianne Heijnen; the CEO of Dutch infrastructure manager ProRail, Mr John Voppen; the secretary of state at the Ministry of Economy, Labour and Digitalisation of the German state of Lower Saxony, Dr Berend Lindner; Bentheimer Railway managing director, Mr Joachim Berends: and first district councillor for the county of Bentheim in Germany, Dr Michael Kiehl.

The new service will run from the border on the Bentheimer Railway in Germany, calling at Emlichheim, Neuenhaus and Nordhorn before reaching Bad Bentheim, which is served by German Rail (DB) long-distance services including InterCity (IC) trains from Amsterdam to Hannover and Berlin.

To introduce an hourly passenger service between Coevorden and Nordhorn, infrastructure work will include new signalling, level crossing upgrades, track renewals to raise the line speed to 80km/h and the construction of station platforms.

At Coevorden, ProRail will modify the layout to provide easier access from Germany, with a new track and a platform for the cross-border services.

The project partners are due to take a final decision on whether to proceed at the end of 2023.

In 2019 Bentheimer Railway restored passenger services between Bad Bentheim and Nordhorn after operating only freight trains for several decades.

This followed infrastructure upgrades and the leasing of four Alstom Lint 41 DMUs, with the reopening heavily supported and funded by Lower Saxony and regional authorities.

The October issue of IRJ will contain an in-depth feature on Europe’s missing cross-border links.