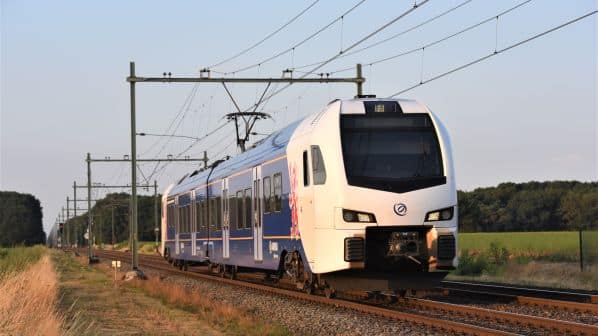 ARRIVA Nederland operated its first long-distance night service in the Netherlands on October 29, running from Maastricht to Schiphol Airport.

The new service operates once a week in both directions on Saturday. It departs Maastricht at 01.01 to arrive at Schiphol Airport at 03.15, calling at Sittard, Roermond, Weert, Eindhoven, ‘s-Hertogenbosch, Utrecht Centraal, Amsterdam Bijlmer Arena and Amsterdam Zuid.

The return service leaves Schiphol Airport at 05.40 and arrives in Maastricht at 07.57.

Only single tickets are sold for the night service at a flat fare of €10, irrespective of the distance travelled. Netherlands Railways (NS) charges €27.90 for a single journey from Maastricht to Schiphol in second class.

Tickets for the new service are only sold online and issued as QR codes that are sent to the passenger’s mobile phone, as ticket gates at stations that are not served by Arriva regional trains are unable to read Arriva smartcards.

Arriva was also planning to launch a night service between Groningen and Schiphol Airport, but this has been postponed due to the closure of the Hanzelijn route between Zwolle and Lelystad.

The Hanzelijn line was severely damaged when high-voltage overhead cables forming part of the Dutch national grid fell onto the tracks on September 2, and infrastructure manager ProRail does not expect to reopen it before mid-December.

Operating only once a week, the new long-distance service operated by Arriva under its own initiative on an open-access basis. As such, it is not considered to be violating the terms of the Main Line Network concession awarded by the government to NS that covers the core passenger network and 95% of train-km in the Netherlands.

Arriva is also developing plans for an hourly open-access service from Amersfoort to Apeldoorn, which would then continue to Zutphen on a route covered by a regional concession awarded by the province of Gelderland. No start date has yet been announced by Arriva.

The new through service to Zutphen would mean that passengers no longer have to change trains at Apeldoorn, where connections between NS IC and Arriva regional services are currently poor.

All three new Arriva services were approved by the Dutch regulator, the Authority for Consumers and Markets (ACM), in September 2021.

In its decision, ACM said that the Arriva open-access services are not regulated by Main Line Network concession granted by the government. Arriva is permitted to operate such services under European Union legislation “under condition that these services do not have considerable impact on the current concession.”

ACM expects that the Apeldoorn - Amersfoort open access service will not decrease NS passenger traffic on that line by more than 0.03%.

Arriva’s strategy of developing open-access services can also be seen as an attempt to stop the direct award by the government of the next Main Line Network concession to NS at the very end of next year, as EU law requires this to be put out to tender after December 24 2023.

Arriva and other passenger operators that are looking to compete with NS have come together as the Netherlands Federation of Transport Companies (FNM), which is currently engaged in legal action to prevent the direct award of the next Main Line Network concession.