THE Dutch provinces of Friesland and Groningen, in association with Germany’s Lower Saxony Transport Authority (LNVG), have awarded 15-year concessions worth €1.6bn to operate regional passenger services to Arriva Nederland, the incumbent operator. 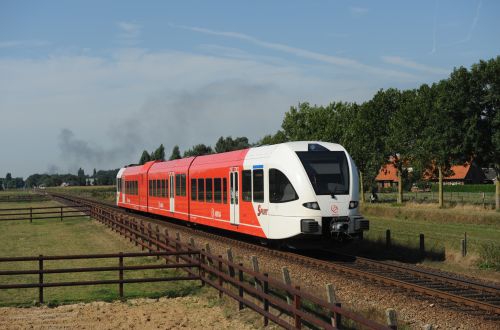 The Groningen - Leer service, which has been suspended since a ship damaged the Friesen bridge over the River Ems in Germany, will be restarted as an hourly service and will call at the recently reopened stations of Ihrhove and Bunde in Germany. At Leer, good connections will be provided with long-distance trains.

Arriva’s current fleet of 48 Stadler GTW DMUs will be refurbished and will be augmented by 21 additional trains, of which 18 will be new. Arriva is expected to confirm an order shortly with Stadler for Flirt DMUs to be known as Flirtino.

Arriva says it “attached significant importance to delivering a more sustainable, environmentally-friendly transport network in its bid.” It says the existing fleet will be converted to energy-saving, emissions-lowering hybrid trains, and the 18 new trains will be powered by biodiesel. In the long term, a complete conversion of its trains to emission-free electric operation is planned.

The new trains will make use of battery technology to regenerate energy from braking. This will make it possible to switch off the diesel engines when the trains are idle for more than 5 minutes. Arriva aims to reduce CO2 emissions by 2%.

Counters installed at train doors to monitor the number of passengers boarding and alighting will be used to help passengers find a seat. An App will be developed to assist passengers when train services are replaced by busses, and Arriva says busses will be available more quickly than now. Bicycles will be available for passengers to use at every station served by Arriva.