ARRIVA has revealed details of its plans for the regional bus and rail concession in the Dutch Province of Limburg, which was awarded to the German Rail (DB) subsidiary last month after preferred bidder Abellio was disqualified following the discovery of irregularities in the tendering process. 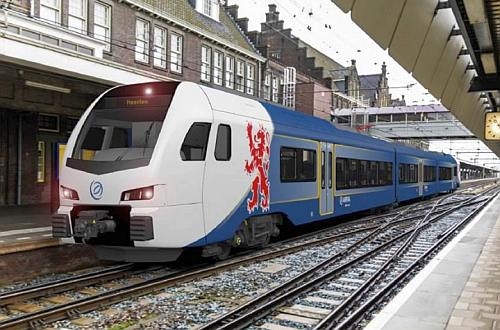 The latter cross-border line is earmarked for electrification, after which a through service is planned from Aachen to Heerlen, Maastricht and Liège in Belgium, with services terminating at Liège Palais station. These services will be branded Limax and Arriva aims to establish a half-hourly service between Maastricht and Liège. A letter of intent has been signed with DB Regio and Belgian National Railways (SNCB) to introduce the new service.

To operate services on electrified lines Arriva will receive 36 Flirt 3 EMUs from Stadler. This will include eight multi-system trains capable of operating on the Dutch 1.5kV dc, Belgian 3kV dc and German 15kV ac electrification systems. Arriva will also take over eight GTW EMUs from Veolia which are leased from Macquarie Railway Europe.

On the Maas Line, Arriva will increase seating capacity by 25-30% from the start of the concession to address overcrowding, which is a problem on this route during the peak. Arriva is also planning to introduce a new fast Maasexpress service in 2020 between Nijmegen and Maastricht Randwijck.

Electrification of the Maas Line is due to be completed in 2020, but in the meantime Arriva will need to obtain additional DMUs to provide up to four services per hour on the partially single-track route. Arriva plans to order additional EMUs to operate the new electric service.

Overall Arriva aims to achieve a 30% increase in ridership and the network will operate using the 'fish-bone' model with branch line services feeding into main lines and busses connecting with trains.