BOB says it cannot match the level of service called for in the new tender. 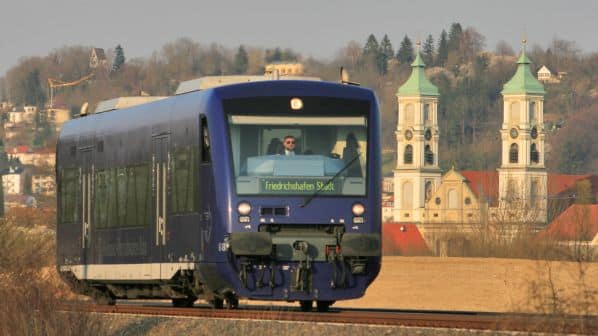 THE chairman of the advisory board of the Lake Constance Upper Swabia Railway (BOB), Mr Lothar Wölfle, has warned that the railway may have to close after the Baden-Württemberg Ministry of Transport and Baden-Württemberg state-owned rolling stock leasing company SFBW announced the details of a joint tender for regional train services on Network 35 between Stuttgart and Lake Constance.

Wölfle said the railway, locally nicknamed the “billy goat railway,” could cease operating as early as next year.

“There is a danger that a highly respected piece of regional identity will be deprived of its existence - despite clear promises by the Ministry of Transport,” says Wölfle, who is also district administrator of Lake Constance.

The BOB was founded after German Rail (DB) decided to close the local stations between Aulendorf and Friedrichshafen in 1988, which led the local communities to launch their own railway in 1991.

The first BOB services operated between Friedrichshafen and Ravensburg in July 1993. At the time, it was the first and only publicly owned regional railway to run on federal railway tracks. The service carried 1.5 million passengers in 2019, and BOB says it was profitable for many years before electrification of the line required a high level of investment in rolling stock to continue operation.

BOB says it currently operates around 550,000 train-km annually between Aulendorf and Friedrichshafen, but the tender calls for around 29 million train-km a year, with individual lots of at least 8.5 million train-km.

“We expected the tender to include more than our current traffic - but we cannot afford a 17-fold increase, even with a partner,” Wölfle says. “That would be the end of the billy goat railway.”

BOB says Baden-Württemberg minister of transport, Mr Winfried Hermann, had assured the railway during its 25th anniversary in 2018 that it had “a fair chance in the new tender.”

“Such a regional initiative must not be allowed to go under,” Hermann was quoted as saying at the time. A subsequent letter from the Transport Ministry specified that a regional rail lottery for transport between Ulm and Lake Constance was planned and there was no reason why BOB could not successfully participate.

The railway says it is disappointed with the framework conditions of the tender from Hermann’s ministry.

“We never wanted special treatment, but a fair chance to compete,” Wölfle says. “In a competition you can win or lose, but it is bitter when you are deprived of the chance to compete at all under realistic conditions.” Wölfle added that the current framework conditions are “a slap in the face for the successful model of BOB as ‘our own railway’.”

The Ministry of Transport responded to Wölfle’s comments by suggesting that BOB could continue to operate by bidding for the contracts as part of a consortium. However, BOB managing director, Mr Horst Schauerte, says this had already been considered.

“We held talks with possible partners at an early stage, formed a bidding team with renowned specialists and built up personnel resources,” he says. “We have carefully prepared for the scenario that transport minister Herrmann announced in 2018: a manageable tender bundle for the Ulm - Lake Constance regional rail service. Why the ministry of transport is now not implementing its own proposal remains a mystery to me.”

Schauerte also raised an issue with price being the sole award criterion. “This means that not the best, but exclusively the cheapest bidder will in future run between Aulendorf, Ravensburg and Friedrichshafen,” he says, adding that the quality service provided by BOB was being “deliberately deselected.”