The tender is part of a wider operating tender in the German state. 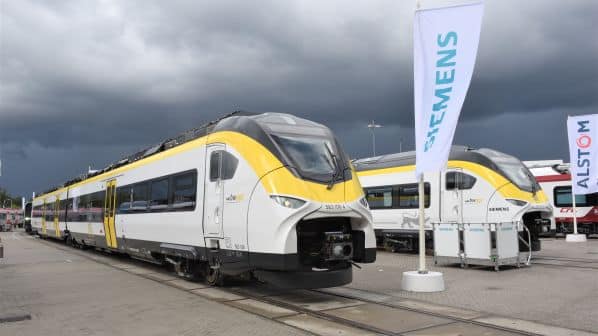 THE Baden-Württemberg Ministry of Transport and Baden-Württemberg state-owned rolling stock leasing company SFBW have launched a joint tender for regional train services on Network 35 between Stuttgart and Lake Constance.

This includes services previously operated by Abellio before it entered German federal government funded bankruptcy protection in July 2021, following NS’s decision to no longer fund losses at its German subsidiary.

The tender, which includes a total volume of 29.5 million train-km per year, is split into three lots with bidders able to win a maximum of two lots. Public transport authority Bavarian Railways (BEG) is involved in all three lots.

Lot 1 will run for 15 years from December 2025, and covers the express network with an annual volume of between 7 and 10 million train-km, with the volume gradually increasing as infrastructure is developed. This includes:

The lot includes an option for regional services on all electrified routes in Baden-Württemberg and on lines from Baden-Württemberg into Bavaria as far as Nuremberg and Würzburg. Services will be provided with new rolling stock, which will be ordered by SFBW and leased to the operator.

The lot also includes the same options as Lot 1 as well as an option to operate the service to Lindau.

The winning bidder will operate Lot 2 with Alstom Coradia Stream High Capacity double-deck EMUs, which were ordered by SFBW in May, and new single-deck trains. The 15-year contract will run from December 2025, and covers between 6.5 million and 11 million train-km pear year.

Lot 3, which was previously operated by Abellio, covers regional train operation on Network 35 in Nordbaden and Oberschwaben from December 2023, and covers between 4.5 and 8.5 million train km.

Services will initially be provided with Bombardier Talent EMUs provided by SFBW, which will be replaced with new single-deck EMUs between December 2025 and December 2027.

The winning bidder for Lot 3 must purchase Sweg Bahn Stuttgart as well as take over the contract with SFBW to lease the rolling stock and Pforzheim depot. The contract was previously operated by Abellio, which has pulled out of all operating contracts in Baden-Württemberg. State-owned operator Southwest German Transport (Sweg) may participate in the tender, and if successful will not be required to pay for the Sweg Bahn Stuttgart shares.

The contract includes an obligation to construct another workshop for maintenance of rolling stock in Oberschwaben.

The contract also includes an option for:

Bids for all three tenders must be received by the Baden-Württemberg Ministry of Transport by 11.00 on November 18.