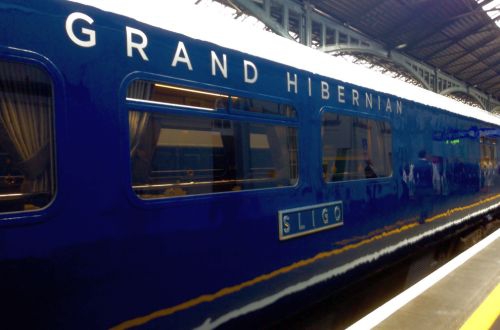 The 252m-long train is formed of five sleeping cars, accommodating up to 40 passengers in en suite cabins, two restaurant cars, a crew car, generator car, and an observation car, which includes a bar.

The 10 former Irish Rail (IE) Mark 3 coaches were rebuilt by Mivan at its workshops in Antrim, Northern Ireland. Sixty craftspeople and 35,000 hours of labour went into transforming the vehicles for their new role.

Inside the train is designed to evoke the feel of an Irish country house and each coach is named after an Irish county, with interior finishes reflecting local flora and fauna and colours inspired by the county’s tartan.

Prices range from €3160 per person for a two-night trip with two guests sharing a twin or double cabin to €7722 for a full six-day tour.