SWITZERLAND’s second-largest railway BLS announced on September 8 that it has submitted concession application for the operation of two long-distance and three RegioExpress routes as it seeks to re-enter the inter-city passenger market. 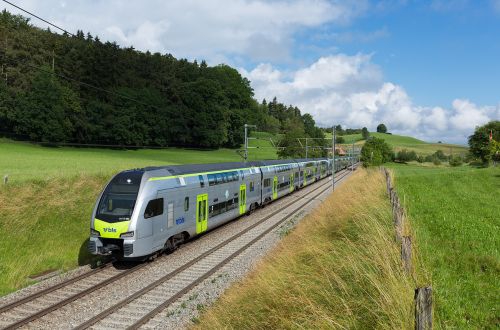 In a bid to open up the market for domestic long-distance passenger services, the Swiss Federal Office of Transport (BAV) has issued an open invitation for applications for the next 15-year concession. The current concession, due to run out for most services at the end of this year, is held by Swiss Federal Railways (SBB), which holds a monopoly in this market and has just applied to continue running these services for the next 15-year period.

BLS says it would invest SFr 495m ($US 521m) in rolling stock for the these routes, including new inter-city trains for the two long-distance lines and additional Stadler Kiss double-deck EMUs for RegioExpress services from Bern to Olten and Biel. Bern - Le Locle services would be operated by new Stadler Flirt EMUs ordered earlier this year.

Despite repeated efforts, SBB and BLS have failed to come to any cooperation agreement up till now, though both companies maintain they are still open for discussion. Both companies face the challenge of balancing loss-making regional services with profitable long-distance operations, where BLS is at a disadvantage having given up its last long-distance service in return for the Bern S-Bahn in 2004.

Until now, SBB has held the concession for the entire country, but formed cooperation agreements with other Swiss operators, including BLS, where required. It recently came to an agreement with Switzerland’s third largest operator, South Eastern Railway (SOB), for two services under a co-branding arrangement from 2020 with SOB using its own rolling stock.

BLS chairman Mr Rudolf Stämpfli confirmed that BLS is still interested in “constructive cooperation” with SBB, saying the decision to bid for only a limited number of concessions leaves the door open for collaboration.

“We are firmly convinced that the arrival of competition will stimulate the railway system, create new impulses and ultimately benefit passengers,” Stämpfli explains. “Users of public transport, the regions and taxpayers benefit from the fact that the railways are motivating themselves to achieve better performance. However, it is also clear that good cooperation in operational, coordinating and overall transport issues needs to continue. After careful consideration of the interests of the company and the overall system, the BLS board of directors decided to adopt a limited market-opening variant and did not go for the maximum possible framework. This shows us that it is possible to strengthen the system through competition without weakening the dominant player. This is a classic win-win situation.”

The BAV is due to announce its decision on the concession for long-distance passenger services at the beginning of December.