FRENCH National Railways (SNCF) has awarded Bombardier a contract to supply 19 Omneo Premium double-deck intercity EMUs, which the state is purchasing on behalf of the Hauts-de-France region. 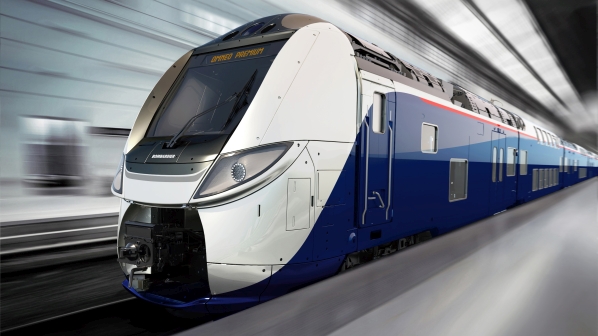 The €256m order is part of the 2010 framework contract between SNCF and Bombardier to provide up to 860 double-deck trains to French regions.

Hauts-de-France region is due to become the organising authority for the operation of Paris - Amiens - Boulogne and Paris - St Quentin - Maubeuge/Cambrai inter-city services with effect from January 1 2019 as part of an agreement with the French government announced on December 7 2016.

The first trains are scheduled for delivery in 2022.

Bombardier says the trains will feature a new interior design which optimises available space to improve seating arrangements, as well as newly-developed wide seats with integrated lighting, power and USB sockets. The interior design, which will feature the region’s colours, and configuration will be fine-tuned in the coming months. The trains will also offer improved access via large, platform-level doors, and wide corridors and gangways for easy movement throughout the length of the train.

The 135m-long trains will have capacity to seat 463 passengers, with multiple units of two offering up to 926 seats per-train, as well as large luggage racks, a dedicated area for two wheelchairs and space for 12 bicycles.