Brightline to open Miami Central terminal on May 19

BRIGHTLINE will extend its West Palm Beach - Fort Lauderdale inter-city service 35km south to its new terminal at Miami Central on May 19, and has confirmed that work will start later this year on its extension north to Orlando Airport. 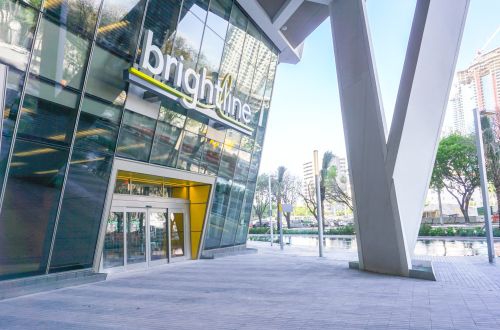 Brightline opens it Miami Central station on May 19.

Brightline will operate eight round trips per day between Miami, West Palm Beach and Fort Lauderdale with a 1h 20min journey time for the 104km trip. To promote the extended service, Brightline is offering special fares of $US 3 for its Smart service and $US 5 for its Select service on May 19 and 20, but nearly all trains are sold out. Normal fares for a Miami - Fort Lauderdale one-way trip are $US 15 and $US 25. Brightline is also offering complimentary car parking and waiving supplements such as its charges for checked baggage as part as promotion of the Miami extension. A series of events will also be staged at Miami Central this weekend to help promote the new service.

Miami Central is connected to the Metromover peoplemover and Miami metro, and next year TriRail, which operate a commuter rail service between Mangonia Park in Palm Beach and Miami Airport. will open a 14.5km branch line to Miami Central.

“In 1896, Henry Flagler built a passenger rail that paved the way for the Miami we know and love today,” said Mr Wes Edens, co-founder, principal and co-CEO of Fortress Investment Group. “We're proud to continue that legacy with Brightline and Miami Central, which are transformative assets for the city and state of Florida. As the first privately-funded passenger train in over 100 years, this innovative model can be replicated to connect many corridors across our nation.”

“South Florida has a vibrant economy and unique lifestyle - yet some of the nation's worst traffic,” said Mr Patrick Goddard, president and COO of Brightline. “We are making an unprecedented investment in Florida and the benefits can been seen today through job creation and the launch of Brightline and Miami Central. We believe that Miami Central will be a significant landmark in Miami for generations and Brightline will connect the state in ways that haven't been done before.”