BRITAIN's prime minister Mr David Cameron has announced plans today to invest an additional £4.2bn to upgrade key sections of the rail network in England and Wales between 2014 and 2019 on top of the £5.2bn already committed for projects currently underway such as Crossrail and Thameslink. 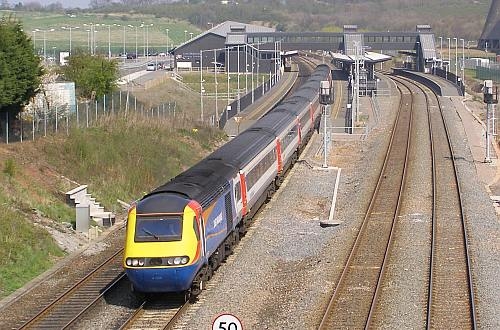 The new spending will extend electrification and add capacity to enable the network to cope with continued growth. The government says the plan will be funded from fare increases and reduced operating costs as a result of conversion from diesel to electric traction.

One of the largest projects is an £800m scheme to create a so-called electric spine running from the port of Southampton to the north. This involves:

Electrification between Southampton and Reading involves conversion of the section south of Basingstoke from 750V dc third rail to 25kV ac overhead. This will be used as pilot scheme for the eventual conversion of the entire rail network south of London from third rail to overhead electrification. The existing system is inadequate for the density of traffic, resulting in trains running at lower speeds than would be possible with 25kV.

Work is already underway to electrify the Great Western Main Line from London to Reading, Oxford, Newbury, Bristol and Cardiff. This is now to be expanded to include branch lines to Windsor, Marlow and Henley-on-Thames, the Cardiff – Swansea main line, and the so-called Valleys commuter lines in the Cardiff area. A £500m connection from the west to London's Heathrow airport is also proposed.

The line from Walsall north of Birmingham to Rugeley on the WCML will be electrified at a cost £30m for commuter services and as a diversionary route for mainline trains.

The London – Leeds – Edinburgh East Coast Main Line has been allocated £240m to increase capacity at bottlenecks and install ERTMS on the southern end of the route.

An additional £322m has been allocated to the £477m so-called Northern Hub project to increase capacity and improve services radiating from Manchester and its airport. The lines from Blackpool and Liverpool to Manchester, Leeds and York are already being electrified, and this will now be extended east to Selby.

Improvements in the London area include £350m to lengthen platforms at Waterloo to provide capacity for 120,000 additional daily commuters.

The plan also includes £200m to improve the freight network, £300m to cut journey times, £200m for stations, £140m for development and innovation, and £65m to improve level crossings.