THE president of the Centre-Val de Loire region, Mr François Bonneau, and French National Railways (SNCF) president, Mr Jean-Pierre Farandou, formally launched work on a new train maintenance depot in Orléans on August 25. The presidents also inaugurated the first Bombardier Omneo Premium double-deck EMU for the region ahead of its entry into service later this month. 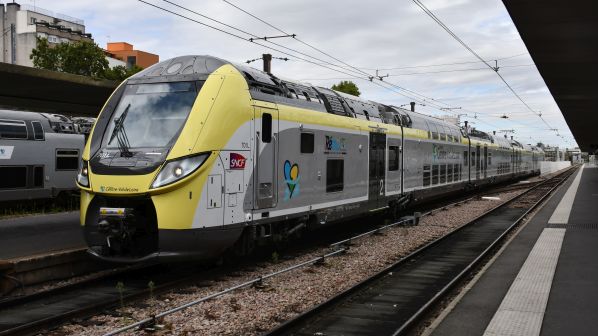 The 32 eight-car 200km/h EMUs were ordered using a €480m government grant following the transfer of responsibility for loss-making ‘Balance of Territory’ (TET) inter-city services on the Paris - Orléans - Tours, Paris - Vierzon - Bourges and Paris - Montargis - Nevers lines to the region on January 1 2018.

The new trains will replace Corail-hauled rolling stock dating from the 1970s. The first of the new trains, each of which can carry over 430 seated passengers, was delivered in spring this year. Delivery of four trains is planned by the end of 2020, enabling use of the new trains on all three routes from the 2021 timetable change in mid-December. All 32 sets are due to be delivered by the start of the 2023 timetable.

The Paris - Orléans - Tours and Orléans - Vierzon lines have long sections which were rebuilt for 200km/h operation in the 1970s, but most sections are currently being refurbished and trains are limited to a maximum of 160km/h. On the Paris - Orléans section there are currently no services operating between 09.30 and 15.00 on weekdays to allow an acceleration in improvement work.

Construction of the €70m depot for the new trains is underway on the site of a former freight depot north of Orléans station, which will open by autumn 2022. Employing 60 staff, the depot will consist of a main building with four 110m tracks plus six exterior tracks for stabling, one covered track for exterior cleaning and a service station. Interior tracks will have retractable catenary which can be energised at either 1500V dc or 25kV ac. The depot has been mainly financed by the region.

No tendering so far

The Centre-Val de Loire region is currently held by the Parti Socialiste, which is not in favour of opening-up train operation to competition. The region has signed a contract with incumbent SNCF Mobility to operate services until 2022. Tendering will become compulsory under EU law from 2023.

On July 8, the region agreed an amendment to its contract with SNCF with the aim of assuring the future of five rural lines, which were in danger of closing in the medium term: Dourdan - Vendôme - La Membrolle-sur-Choisille, Chartres - Courtalain, Bourges - Montluçon, Tours - Loches - Chinon, plus the metre gauge Salbris - Valençay line. A new management structure is under investigation for the latter three lines, with a transfer away from national infrastructure manager SNCF Réseau. The work will mainly be financed by the region and central government.