The project involves construction of four new stations and is expected to attract 500,000 new passengers per year. 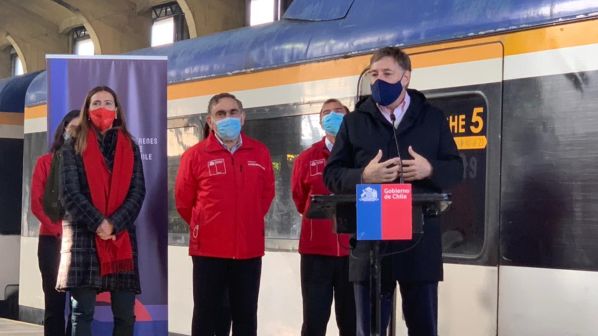 CHILE’s Transport Ministry and Chilean State Railways (EFE) have unveiled a project to expand passenger services to an 11km extension of the Victoria - Temuco in Araucanía region to the neighbouring municipality of Padre Las Casas.

The Pesos 1.4bn ($US 1.94m) project involves the addition of four new stations, two in Temuco and two south of the Cautin River in Padre Las Casas, offering a journey time of seven minutes. Two trains per hour will operate on the line during peak times from Monday to Friday.

The Victoria - Temuco line transports 500,000 passengers per year and the extension is expected to add another 500,000 to this total. The line is set to benefit from the addition of three new trains which along with infrastructure improvements will help to reduce overall journey times by 30 minutes.

The infrastructure work includes the construction of a new bridge across the Cautin River, which involved the laying of 15 concrete blocks and cost close to Pesos 20bn. This bridge has enabled the resumption of freight services to the Los Ríos region.

An event to announce the project was to held on June 10. Chilean under secretary of transport, Mr José Luis Domínguez, minister for the environment, Ms Carolina Schmidt, mayor of La Araucanía, Mr Víctor Manoli, and president of EFE, Mr Pedro Pablo Errázuriz, along with regional authorities, travelled between the cities to publicise the new rail connection.

Errázuriz said introduction of the service is key to improving connectivity and quality of life for the residents of Padre Las Casas, a community which suffers from heavy road congestion.

“For EFE, the La Araucanía region is one of the most important points in our network and where we are making large investments to contribute to improving the quality of life of Chileans, through new trains, new tracks, and new services,” Errázuriz says.