Cost only factor in cancellation of British electrification projects

A report released on March 29 by Britain’s National Audit Office has concluded that the Department for Transport’s (DfT) cancellation of three major electrification projects in July 2017 was motivated solely by cost, countering secretary of state for transport, Mr Chris Grayling’s, claims at the time that bi-mode trains could offer similar benefits to passengers. 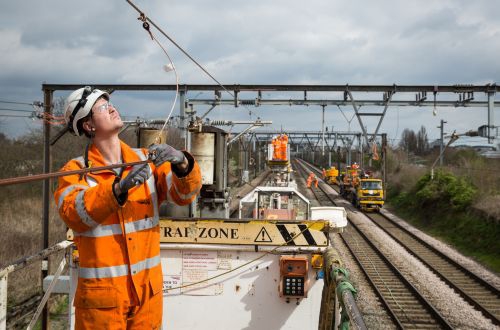 The report says that cost increases in infrastructure manager Network Rail’s (NR) 2014-2019 five-year funding period meant electrification of the Midland Main Line (MML) between Kettering, Nottingham, and Sheffield, the Great Western Main Line (GWML) between Cardiff and Swansea, and the Windermere - Oxenholme branch in the Lake District were no longer affordable.

NR’s reclassification as a public body in 2014 hindered its capability to borrow funds to make up the shortfall. With a £2.5bn budget hole and plans to raise £1.8bn through asset sales unachievable, the DfT, NR and the treasury decided they needed to cancel projects.
The DfT estimated that cancelling the three electrification projects would save £105m in 2014-2019 investment period and avert £1.385bn of spending in the subsequent 2019-2024 funding period.

Grayling and chancellor of the exchequer Mr Phillip Hammond agreed to the Midland Main Line and Windermere - Oxenholme cancellations in March 2017, but prime minister Mrs Theresa May requested an updated business case for the Cardiff - Swansea project. This was delivered in July 2017 and found that the benefit:cost ratio of the scheme had fallen from 0.6:1 to 0.3:1, prompting May to agree to the cancellation, and Grayling to make the announcement that all three projects had been scrapped.

The report says that it is too early to tell the extent to which the DfT will be able to deliver the benefits of electrification without electrifying the three routes. While the plan to introduce bi-mode trains to run on the non-electrified sections would offer greater flexibility, the report says there are some disadvantages such as increased track damage and higher energy costs.

It also says that despite Grayling’s claims that bi-mode trains could offer a journey time of one-minute less than electric sets between London and Sheffield, no bi-mode trains are currently available to meet this level of performance, although it is expected that they will be by 2022.