BADEN-Württemberg Ministry of Transport announced on January 26 that it has awarded DB Regio a contract to operate regional services on the Rhine Valley line from Karlsruhe to Basle in Switzerland. 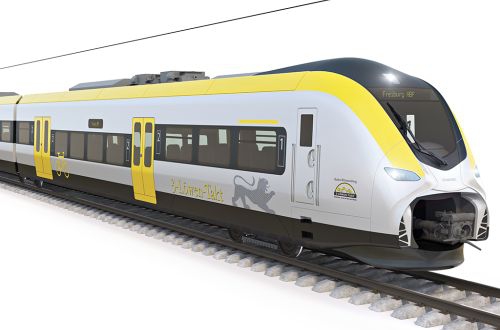 DB currently operates the services using double-deck coaches and Bombardier Traxx AC class 146 electric locomotives, but these will be replaced by two new EMU fleets from Siemens. Desiro HC partially double-deck EMUs will be ordered for Karlsruhe - Basle regional expresses, while stopping services will be operated by Siemens’ new Mireo EMU - the first time this design has been ordered by any operator.

All the new trains will carry the new Baden-Württemberg white and yellow livery.

The cost of operation to the state of Baden-Württemberg government will fall from €11.69 per km under the current contract to €7.3 per km.

Historically Baden-Württemberg had chosen to award DB a contract covering most services in the state; only in recent years have individual groups of lines been tendered, normally generating significant reductions in operating costs. It is however unclear whether the new trains will offer the same capacity as the existing rolling stock.

Substantial infrastructure improvements, already planned or under construction on the route will create additional capacity during the life of the contracts, enabling more and faster trains on a route shared with around 140 freight and more than 30 ICE services in each direction. The tunnels currently under construction beneath the town of Rastatt should open in 2022 removing some conflicts with freight trains and ICEs and further capacity improvements south of Offenburg are planned by the mid-2020s.