GERMAN Rail (DB) has received planning approval from the German Rail Authority (EBA) to close and relocate Hamburg Altona terminus station, which is located west of the city centre, to a site at Diebsteich, roughly 1km further north. 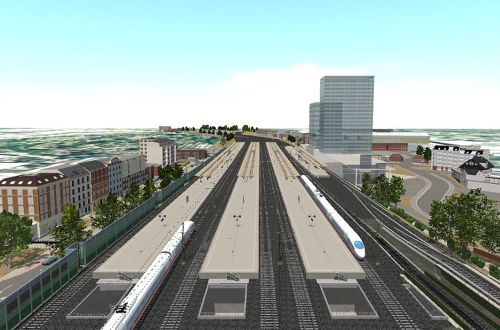 The new station’s name will remain Hamburg Altona and will be built on the site of the existing two-track S-Bahn station Hamburg-Diebsteich. The project includes construction of an eight-platform station, with two platforms remaining in use for S-Bahn services and the other six for regional and long-distance trains. The new station is scheduled to open in December 2023.

Hamburg Altona is currently the starting point for almost all southbound long-distance services originating in Hamburg and is also served by regional trains to Itzehoe and Westerland (Sylt). Under current operations, empty ICE trains have to reverse at Altona after leaving the stabling depot at Hamburg Langenfelde, located just north of the new station site. The relocated station eliminates this problem, enabling trains to simply call at the new station before continuing their journey into central Hamburg.

The new station will feature office accommodation in two large towers and an architectural competition will be held in 2018 to finalise the design. Around 25km of new track will be laid along with 48 points all of which will be controlled by new signalling.

The existing Altona site was sold by DB to the Hamburg city government for €38.8m in June 2015. The site will be cleared of all railway infrastructure and redeveloped with 1900 new apartments and a new park planned. DB estimates that only 60% of the land area is currently in use with extensive areas of waste ground. The underground Hamburg Altona S-Bahn station and the lines serving it will remain open after the closure of the mainline station.